For the fifth year in a row, College-Club and the Grachtenfestival have set up an exhilerating evening - starting with a multimedia lecture called ‘Girl Power! The New Heroes of Hollywood’, followed by a boat trip, an open air concert and drinks!

Just a few years ago, buying a ticket to an action- or adventure movie meant buying a ticket to a ‘guy movie’: a film that was centered around men, and where women mostly played a decorative part. Today, a lot has changed, as female heroes play an increasingly prominent role in our popular culture: from The Hunger Games and the new Star Wars movies to Captain Marvel and Wonder Woman. How has this shift been established? What does this mean for social debates about gender equality? And does it mean that the problems surrounding negative stereotyping and sexism are finally being solved? This lecture is an ode to the female action hero, in which we take a good look at the historical and societal factors that have contributed to this change.

Please note that the lecture will be taught in English! 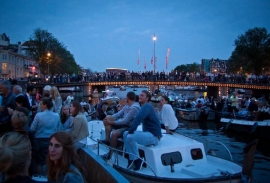