[UITGESTELD] The Rivalry between Iran and Saudi Arabia

College - [Postponed] The Rivalry between Iran and Saudi Arabia

Kim Ghattas and Paul Aarts will share an insightful overview of conflicts in the Middle East. In 2020, the tensions in the Middle East show little sign of calming in a region with the recent assassination of the Iranian General Qasem Soleimani and the unveiling of Donald Trump’s “win-win” Israeli-Palestinian peace plan. An overview will be given of the wider Islamic world since 1979, the year of the Iranian revolution, and about the politics of a region that has long been shaken by regional rivalries — mainly between Saudi Arabia and Iran; between Sunnis and Shiites — and foreign intervention. The wider Middle East became increasingly split between pro-Saudi and pro-Iran states and non-state actors, with the United States squarely leading the anti-Iran camp.

Against this backdrop, Saudi Arabia and Iran will be in the spotlight: How should we interpret Iran’s foreign policy? What can be expected from Washington and the Iraqi Shiite militias? Did the spectacular rise of Saudi Arabia's Crown Prince Mohammed bin Salman unleash a power struggle within the House of Saud? Will he get away with the brutal murder of Jamal Khashoggi? And why did he launch the war in Yemen of which no end is in sight? How is the Saudi-Iranian rivalry being played out?

Please note that the text is subject to change and the lecture will be taught in English. 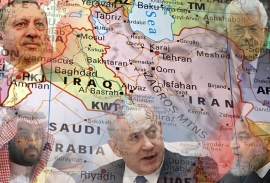