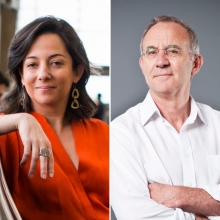 Kim Ghattas is an Emmy-award winning journalist and writer who covered the Middle East for twenty years for the BBC and the Financial Times. She has also reported on the U.S State Department and American politics. She has been published in The Atlantic and the Washington Post and is currently a non-resident scholar at the Carnegie Endowment for International Peace in Washington. For six years, she travelled regularly with Secretary of States: Condoleezza Rice, Hillary Clinton and John Kerry. Her first book, The Secretary, 2013, was a New York Times bestseller. She recently published her second book 'Black Wave'/ Born and raised in Lebanon, she now lives between Beirut and Washington D.C.

Paul Aarts has been teaching international relations and Middle East politics at the University of Amsterdam for more than thirty years. His research focuses on the politics of the Arab world, with a specific focus on the Gulf countries. He has written several books, a.o. 'Saudi Arabia: A Kingdom in Peril' (with Carolien Roelants), 2015 and Saudi-Arabië: de Revolutie die nog moet komen, (with Carolien Roelants) 2016, the latter has been translated into English, Arabic and Persian. Together with his students, he regularly visited countries in the Middle East, in particular Iran, Iraq, Yemen and Syria. He carried out assignments for, among others, the Ministries of Foreign Affairs and Security and Justice and the European Commission.